At the flying field this morning, there was some discussion of our favorite types of planes. Doug, a fellow member of the club, asks me if I’d like one of his gliders, since he had just bought a new one. I told him how much I would appreciate that — I was looking for a stable platform on which to mount a camera in the near future. So, I followed him to his house after flying, and he presented me with a beautiful EPP foam glider with a six-foot wingspan. It would barely fit in my car.

But, as we wandered through his neat and well-apportioned workshop, Doug starts handing me some other excellent models, with the explanation that he really needed to thin out his collection. I was flabbergasted and very appreciative. The models are magnificent and includes this well-built plane from Green Models/Maxford known as the “Butterfly” (which I believe has been discontinued). It’s a slow flyer with a four-foot wingspan.

Then he handed me a Pitts Special made from EPP foam. With a wingspan of 34″, this one is heavier than expected — it’s going to be fast, so it scares me just a little bit!

Finally, Doug gave me a beautiful (discontinued) eFlite offering: a Curtiss Jenny with a 34-inch wingspan that looks like it has never flown.

With the addition of these four planes, I’ll need to research the power requirements, order new batteries, and configure my transmitter. What’s more pressing is I need to look hard at storage configurations to have a safe place to put them.

To alleviate the storage situation, I remembered the plane racks that Doug and Dave have and decided to duplicate that idea. After clearing out a section of the garage and purchasing the necessary dowel rods, I finished the rack in a couple of days. 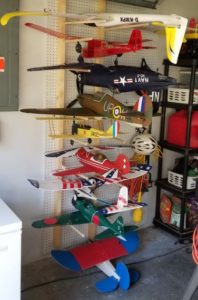 Mounted here are all the larger planes of the fleet, including those that won’t fly again until major repairs are undertaken.