The New Adventures of R/C Flying

Flash forward to February, 2018. I had just retired from teaching after 37 years,  finished my treatments for my third bout with cancer (later, later) and was in West Knoxville to visit mom and dad. Any time I am in the area of the Turkey Creek shopping complex, I almost always make a pilgrimage to the HobbyTown USA, most often just to wander around and see what creative things are available these days. This time, I was experiencing the joy of the new-found freedom of retirement, thinking that I just might have time to be a “hobby boy” again, so I wandered over to check out the airplanes.

When I was trying to fly before, most of the planes had large, powerful, and noisy engines which ran on glow plug fuel. It was a messy business, but if you wanted to fly, that was about the only game in town. I never really became confident enough to actually enjoy the hobby, which had kept me from even thinking about it over the years. I crashed my only plane and the skeleton of its replacement was abandoned in the attic.

These days, however, the technology has improved by leaps and bounds. Electric planes are ubiquitous — they are smaller, lighter, and less expensive. They are mostly made of a sturdy foam that is easily repaired. Of course,  I didn’t know all this when I walked in the Hobby Shop that day, but as I was looking at the different planes and the reasonable prices, that little voice said, “Do it!”. I asked the sales guy what would be the best plane for an old fart to learn with, and he showed me the Horizon Sport Cub S, the box emblazoned with “Teach Yourself To Fly!” I was excited. For $130, it came completely assembled and included the transmitter.

I only needed to snag a couple of single cell batteries (at $4 each) to be ready to take off. Mom and dad have a little clearing in their backyard — enough for me to try to fly, and sure enough, she took to the air nice and slowly as I built up my confidence. It was light and sturdy enough to survive any crashes and there was a built-in SAFE mode — a red “panic” button that would level out the plane if you got in trouble. I was thrilled! Dad wasn’t interested in flying it, but he did enjoy watching.

Back in Florida, I found two connected lots with plenty of space about 2 miles from my house and would fly around when time and the wind was advantageous. I was even able to practice takeoffs and landings on the little-traveled neighborhood road.

On my next trip to Tennessee in March, I acquired a low-winged T-28 Trojan which presented different flying characteristics. Later, I drove to Orlando to find Graves Hobby Shop.

Oh, my! Anything related to radio controlled models is available at this wonderland. I left Orlando with a bi-winged  Stearman. All of my planes were small, light foam models that were fairly easy to fly and easy to repair with scotch tape and glue when they crashed.

All three planes were designed with two different flight modes — a simple mode and an advanced mode, so I was able to train myself to fly the more challenging configurations, with the ability to return quickly to the easy mode if I overreached my skill level.

In March, my schedule became a little more complicated when I committed myself to a run for the District 5 seat on the Citrus County School Board. I have always avoided politics and have never been a self-promoter, so campaigning for School Board was an unnatural act for me. Very often, I had to reach outside my comfort zone. One of those times found me with a small group canvassing a Crystal River neighborhood door-to-door. At one of the houses, I observed that there were fairly large, foam airplanes stacked in a pile outside the front door and more hanging in the garage. While the ladies in my group chatted with the wife, I struck up a conversation with the husband and asked him about his planes. He showed me more planes (and pieces of planes) in the back of his truck and mentioned that he flew with a club on the soccer fields of the athletic park in nearby Holder. I thanked him profusely. In the midst of doing a task I was ill suited for, I had acquired very useful information.

I visited the field the next day and discovered that they mostly met from 7 – 9 am, before the wind picks up. The Central Ridge R/C Club flies only electric planes, so that was right up my alley. I rejoined the AMA, wrote a check for my club dues and suddenly, I had some really nice, retired guys to serve as my flying instructors. Most of them have been flying for a very long time, and many were familiar with the “cow field” as well. They have been good friends and I have appreciated their expertise. I am constantly learning stuff from them.

One of the hard lessons I have learned is that there are consequences to reaching beyond ones skill level too fast. On a return trip to Graves Hobby Shop, I acquired an advanced transmitter that would control all my planes (which was smart) and purchased a large model plane to assemble (which ultimately was not). … 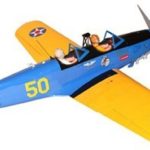 A Scratch-Building Experiment I decided that it would be very satisfying to try to build a model completely from scratch — something I have never tried before. The challenge would be to create a flyable model, despite being a relative newcomer to this hobby. These days, aircraft can be constructed from a variety of lightweight …