This morning we have breakfast at the hotel.  Saw something I have never seen before.  A pancake machine that shoots pancakes out like copies.  They looked good, but we didn’t try them.

Our first stop this morning is to find The Corner in Winslow, Arizona from the Eagle’s song “Take it Easy.” It’s actually called “Standing on the Corner Park“. Interestingly, The town has changed the lyric of the song from “Standing on a corner” to “Standing on the corner” — apparently in an attempt to prevent other corners from competing for attention…

It is so funny how many people are hanging around getting their pictures taken here.  There is a park that has a brick wall with Winslow, Arizona painted on it, along with other pictures in the ‘windows’ of this wall. This used to be an actual building. When they razed the building, they kept the wall. In the center of the intersection on the asphalt is a huge painted Route 66 logo. 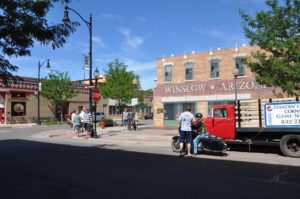 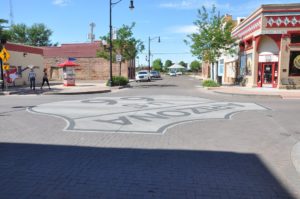 One girl got in the center of the intersection with her arms upheld until somebody honked and she scooted to the sidewalk.  There are a couple stores with more Route 66 stuff than you can imagine. 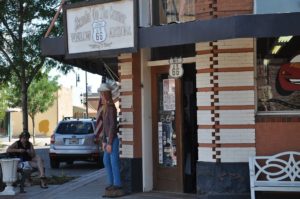 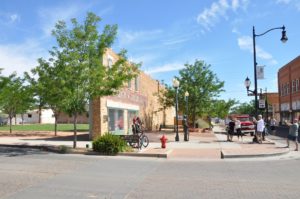 Of course, we had to take home a couple things!  While Tim was getting a picture of the wall from the side, I asked a couple if they wanted to have their picture taken together.  They smiled and said no thanks….then he asked if I was commissioned by the city to stand and take pictures of people.  I told him yes and that I was a goodwill ambassador for the city.  Then I told him that actually my Daddy will ask people he sees taking each other’s pictures if they want one together.  I explained I was just being my Daddy today.  It’s cool how many people have been so appreciative over this trip when you ask that. 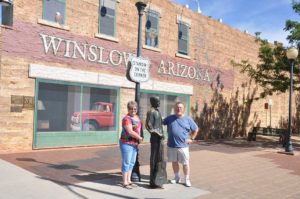 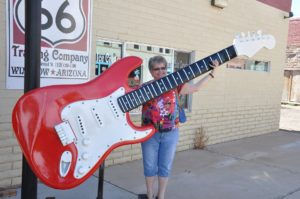 Winslow corner.  Check.  Now….on to a big huge hole in the ground.  We backtrack about 20 miles to the Barringer Meteor Crater.  We do the outside guided tour, look through some of the displays inside, and check out the self-guided viewing areas.  It is so hot.  This crater is HUGE.  Again…amazed at how many languages we heard spoken here. 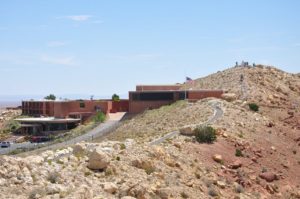 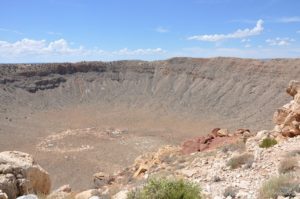 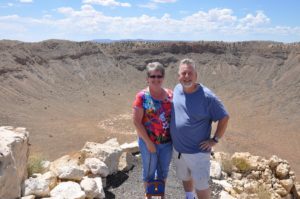 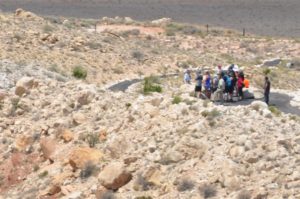 Oh!!!  And there were two penny machines here….so two more for the collection!

It is noonish, we have two sights done at this point, and we are ready to start towards Taos.  We ended up stopping at a Chester’s and had fried chicken.  Even though this is a chain, we have never eaten here.  Good chicken.  Good mashed potatoes!

Next stop is the Petrified Forest and the Painted Desert.  These were both very beautiful spots to drive through.  I guess Tim and I honestly preferred Bryce Canyon.  I don’t know if that’s because it was the first and it blew us away… 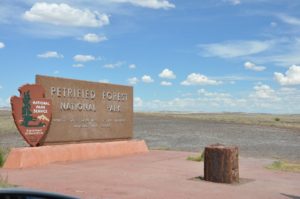 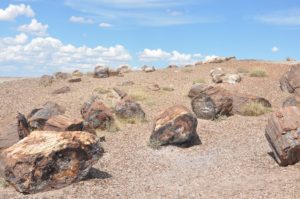 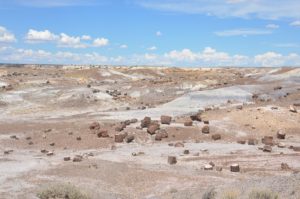 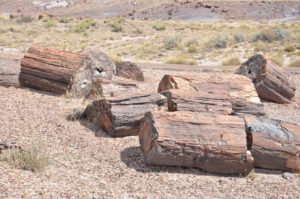 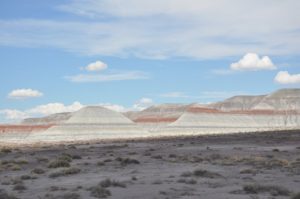 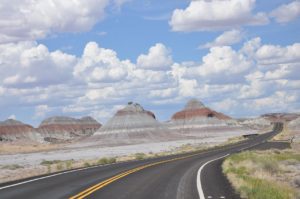 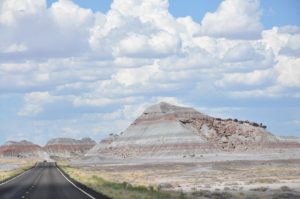 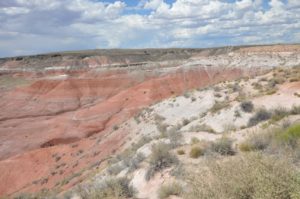 So NOW we are on our way to Taos!  But wait….it’s almost supper time!  I had texted Brian York about BBQ in San Antonio and remembered a place called Rudy’s.  Tripadvisor.com delivered AGAIN.  We found a Rudy’s in Albuquerque and had prime rib and baby back ribs.  It was as good as we remembered from our BBQ vacation years ago! 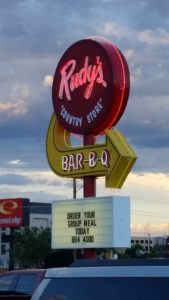 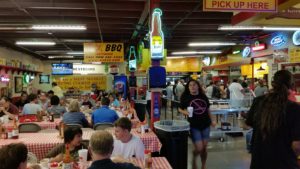 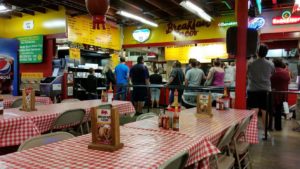 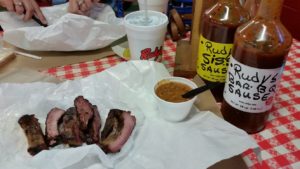 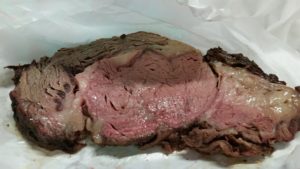 OK….so NOW we are finally ready to put Wyndham Taos in the GPS.  It says almost 6 hours.  There are rain clouds all around us and we never see more than a few drops.  The last 20ish miles into Taos are a tad reminiscent of the road to Sedona….without quite the harsh switchbacks.  It’s 10:30 or so and we see a sign for the Rio Grande Gorge.  Great.  I am now dreading going across this, even though you can’t see a thing!  Thank goodness, you have to turn off the road we were on to cross that suspension bridge 300-400 feet above the ground!

We pull into Wyndham and get our keys. 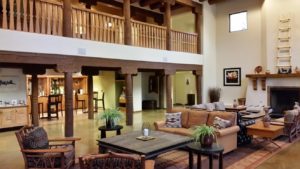 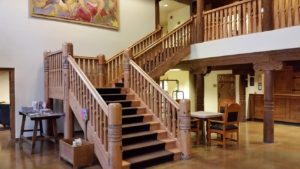 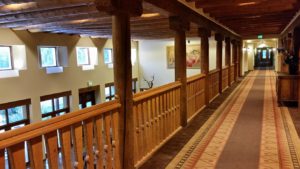 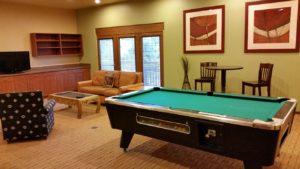 We have a studio this time.  We will get to sleep on a Murphy bed for the first time.  The woodworking in this place is really amazing.  Furniture is very rustic looking.  Even though this is a smaller unit, it has so much personality.  We have a balcony, but who knows what we will see in the morning! (Kim actually stepped out onto the balcony in her nightgown the next morning and was greeted by the folks in the next unit, a few feet away!) 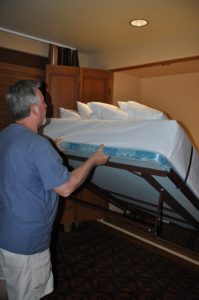 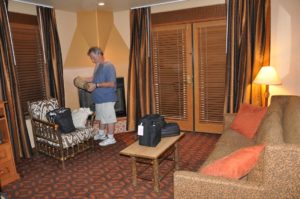 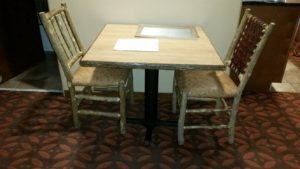 Tomorrow will be our only full day in Taos.  The guy checking us in told us about a festival going on in the Plaza in the downtown area.  He gave us a couple restaurants and a few ‘gotta see these places’ to fill our day up tomorrow.  Common sense says go to bed.  I’m sitting here typing for a blog and my computer says it’s 3:00am back home.

Poor Tim looked on the school calendar and found out he gets to start back to school the Monday after we get home on a Thursday night….very late as usual I am sure!