Today we left Kevan’s house after some very tender sleepy hugs from Isaiah.  We got biscuits from Bojangles and stopped by Searight and Marian’s before we headed on the first leg of our trip.  Our stop tonight will be St. Louis. 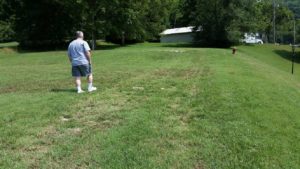 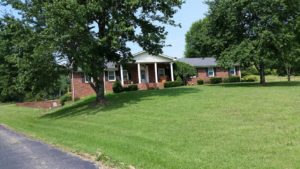 Our first stop is in Carthage, TN to see my grandparent’s home. (Actually, I saw the sign for Carthage as we stopped at a rest area, and asked Kim if she wanted to take a side trip–we try to keep open to some improvisation.) The home we visited for many years when I was a child is no longer there…neither is the gas station/grocery store that they owned across the street.  However, we were able to find the home they lived in after they retired. 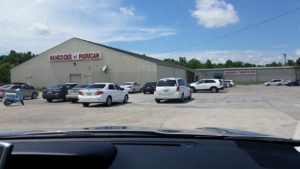 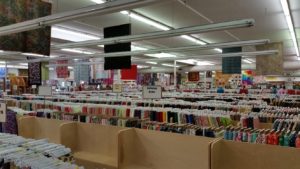 Sharon and Debby from the quilting ministry at church told me how wonderful Hancock’s Fabrics in Paducah, KY was.  They were not joking at all!  Of course, I had to make a purchase….  🙂 I was browsing some of the fabrics, and some lady looked at me, chuckled, and said sympathetically, “You poor man…” implying that I was stuck in here against my will. I responded, “On the contrary, I’m a dulcimer builder looking for fabric for cases.”

From Paducah, the plan was to eat lunch at Lambert’s Cafe in Sikeston, Missouri. By the time we left the fabric store, it was going to be dinner, instead. Our GPS sent us on some beautiful rural roads that sent us over the Ohio River and Mississippi River within a mile or so of each other. Sikeston is basically a wide spot in the road in Southeastern Missouri, and we arrived around 5:00.

Lambert’s claim to fame are the “throwed rolls” and fine home-cooking. The place was an absolute trip, and well worth the extra drive. The employees walk around with fried okra, sliced potatoes, black eyed peas, macaroni and tomatoes and sorghum and apple butter for the rolls. The apple butter guy, Brady, sat down to chat with us for a large part of our dinner time. Discussions ranged from high school band, show choirs (he was 16), politics, and church. It was all quite surreal and when I actually caught a roll, it was delicious. 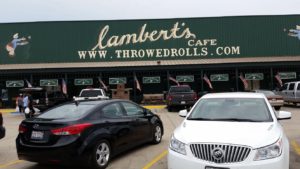 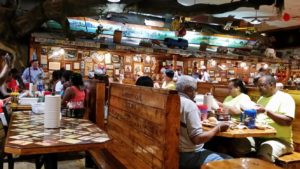 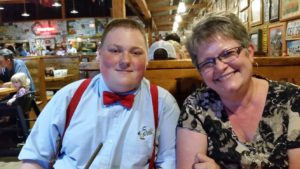 With our bellies full, we headed north for the final 2 hours to St. Louis. 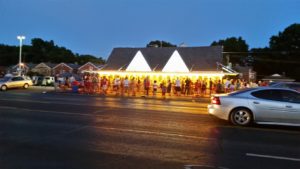 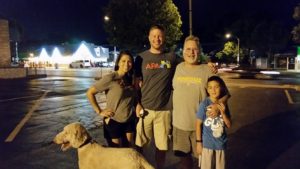 Before we checked into our hotel, we met friends of Phil’s (Rocky, Ashley, Kingston and their dog) at Ted Drewes, a frozen custard place close to their home.  We had never seen them before, so we were looking for a taller version of Phil.  Rocky said they had their dog with them.  Thinking this shouldn’t be hard to find someone that looks like Phil, we pull up to this place…..everyone is outside enjoying the evening and their desserts.  There were probably 100 people here.  All of a sudden we hear a dog bark…look in that direction, and there is Phil’s twin.  We talked for about 90 minutes and then headed to Union Station in St. Louis. 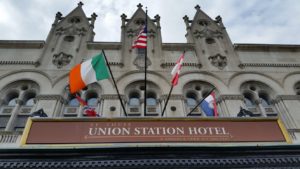 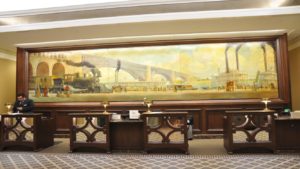 We arrive around 10:30pm.  There is a laser show at 11.  So we hustle to get to that and enjoy seeing this in the renovated Grand Hall of the Station.  This place is amazing if you are ever in the area! 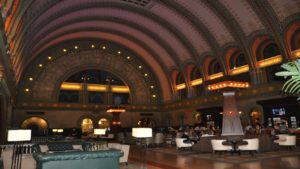 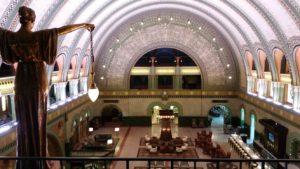 The history of this place is fascinating. This was a major railroad hub–it was the terminal point for many railroads and at one time was the largest and busiest train station in the world. What they have done with the station has been magical.

We ended up taking a ton of pictures. They are planning a major renovation to another part of the complex that will include the Farris Wheel purchased from the Navy Pier in Chicago. We’d like to return in a couple of years. Below are shots of what was once the embarkation area, the framework of the original trainshed that covers much of the hotel, and just a taste of the light show in the Grand Hall. 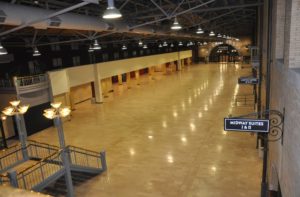 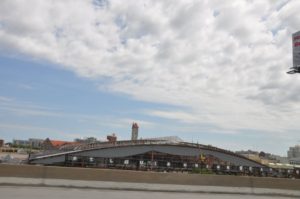 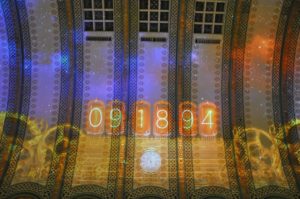 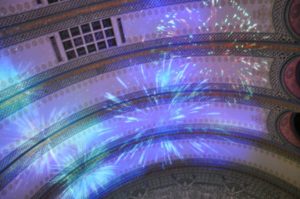